Ibsen's "The Lady From The Sea": A Symbolic Discourse 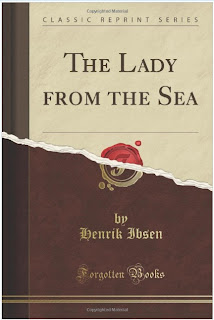 The study of archetypes begins with the study of the world of myth - a world of fictional and thematic design, and of metaphor in which everything is "potentially identical with everything else" (Frye, 1957).

However, the presence of a mythical structure in realistic fiction usually poses a technical problem, in the plausibility of the work. Thus, a device is presented to solve this problem - displacement. This displacement of myth in a human direction aims to "conventionalize" content in an idealized structure.

The central principle of displacement, according to Frye, is to link mythical concepts with realistic fiction by some form of simile, such as analogy, significant association, incidental accompanying imagery, and the like. Therefore, in a myth, we can have a sea-goddess, in a realistic fiction, we may have a woman who is significantly associated with the sea, like Ellida in Henrik Ibsen's "The Lady From The Sea."

There are three organizations of myths and archetypal symbols in literature, according to Frye. These are: the undisplaced myth which takes the form of two contrasting worlds - the desirable (apocalyptic) and the undesirable (demonic); the romantic, the tendency to suggest implicit patterns in a world more closely associated with human experience; and realism which gives the emphasis on content and representation rather than on the shape of history.

Looking at archetypes as natural objects with human meaning which form part of the critical view as a civilized object, the author will now embark on the task of discovering the archetypal symbols present in Ibsen's "The Lady From The Sea."

Based on Frye's organizations of myths and archetypal symbols, "The Lady From The Sea" may be classed under the category of the romantic archetype where archetypal symbols suggest mythical patterns associated with human experience.

The title itself exposes a symbol which presents a literary structure which can be isolated for attention - the sea.

Ellida, the young wife of the country doctor Wangel, is known in the neighborhood to be the "lady from the sea." Her almost extraordinary attachment to the sea gives her this title. That she gets perfectly well and happy when communing with the sea is the one excuse/reason her husband would give an acquaintance when the latter typically inquires about Ellida's affection towards the sea.

Another character who is linked to the sea is Jackston/Friman, Ellida's former lover, who does not only come from the sea, he being a ship officer, but also has that effortless power that draws Ellida to him.

As an archetypal symbol, the sea denotes purification and redemption, death and rebirth. In the play, this is clearly outlined through the characters. Ellida, having this illusion of love for a complete stranger, finds herself purified in the end with the realization in this context:

"Your (the Stranger's) will hasn't the slightest power over me anymore. To me you are a dead man - who has come from the sea, and will return to it. You hold no terror for me anymore - nor my fascination" (Ibsen, 328).

This purification has led to her redemption from utter forlornness and desolation in what could be her life with the Stranger, the red-headed man of violent passion.

The Stranger who has held power over Ellida for years, comes back hoping that he can still take her away with him. He also has gone through the same process of death and rebirth, as he awakens to the truth that he has long lost the woman he has hoped to possess. Thus saying:

"From now on, you are no more to me than a shipwreck that I have come safely through" (328).

Dr. Wangel, who has always thought that he is giving Ellida what he thought is best for her, comes to the realization that -

"It was really a crime against Ellida to take her from out there (the sea) and bring her here…I should have been like a father to her, a guide…but I'm afraid I've done absolutely nothing" (317).

Fortunately, in the happily-ever-after ending, Dr. Wangel cancels the bargain and sets Ellida free to choose her own path. And by freeing her, he leads her to come running back to him on her own free will.

Another character who has gone through purification and redemption is Boletta, Dr. Wangel's daughter who has always disliked her stepmother Ellida who is not much older than she is. Her antagonism towards Ellida is brought by the fact that the latter never showed Boletta and her sister Hilde some motherly affection.

Boletta, who has always considered herself like the carp pond that has never been able to swim beyond the little pond and explore the vastness of the sea beyond, is saved by her former tutor Arnholm. Incidentally, Arnholm also realizes that his existence is only made meaningful by the possibility of helping Boletta to see the outside world and teach her what she longs to learn and make her impossibilities possibilities. Boletta's and Arnholm's rebirth is born out of the recognition of a need to be loved and be needed.

Other than the sea, the play also presents other archetypal symbols. The story takes place in summer. The Mythos of Summer as part of the four phases of myth, signifies romance, the triumph phase, and the entrance to paradise.

This play with the summer backdrop does not go charging straight to paradise. The Mythos of Summer, as a cyclical movement of nature has to go through three stages. The first stage is the age of conflict where the protagonist Ellida is confronted by her past, her mythical marriage to a stranger who has the "unexplicable power that he has over her mind," and the fear that it will never be over as long as she lives. She is also haunted by the "unspeakable thing" that is her dead child who had the stranger's eyes which "changed color with the sea… when it's calm and sunny…so where when it was stormy."

The second stage is the pathos of death where there is the battle between two opposite forces. Ellida asks to be left alone that she may be completely free when she meets the stranger. For it is only in being free that she can have a choice and can give a decision. She wants to be completely free to choose whether to be with the stranger or to let him go away.

The third stage is the anagnorisis of discovery. Having laid all the cards, Ellida, Wangel and the stranger have reached their epiphany, realizing what each must do, and what each has failed to do. The discovery leads them to the doors of paradise as they triumph in the Mythos of Summer, the Mythos of Romance.