K+12 and Freire's "Pedagogy of the Oppressed"

With the government's project to push K+12 program to "to raise the country’s basic education course to world standards and produce high school graduates ready to be employed even without a college degree," (Philippine Daily Inquirer, Oct 7, 2011) we wonder if our education system will improve and make our youth globally competitive.

I hope our teachers will focus on improving themselves and truly get serious about not only what they teach, but more so on how they teach. The best teachers I had set themselves apart from the common ones by telling me, showing me, explaining to me, making me feel about a subject matter. Subject matters are generic - it's in the syllabi - but only the great mentors can lead you to the heart of the matter.

Here's my review of Paulo Freire's "Pedagogy of the Oppressed." 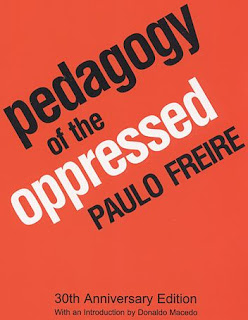 I have always believed that education is the greatest catalyst for change. But education is not measured simply by knowing how to read and write or count from 1 to 10. Education does not mean having a PhD or an MA after one's name. Education means more than knowing who Plato is or what the square root of 4 is. Education can be meaningful only if it serves some purpose, meaningful purpose.

As a catalyst for change, education should be the bond to link humanity into one brotherhood. Education ought also to change man's flights from poverty to economic freedom. Education should liberate mankind from oppression and from their oppressors. This is the kind of education Paulo Freire is heralding in his masterpiece the "Pedagogy of the Oppressed" (1970).

What is the "pedagogy of the oppressed"?

It is not difficult to categorize an oppressed from an oppressor. One can simply look at them, and he can identify who is who. There is no dividing line between these two classes of people, but a big marginal difference - that which makes pinpointing as easy as identifying black from white, day from night, the poor from the rich.

Basically, the oppressed suffer from two social maladies: fatalism and self-depreciation. The oppressed rely greatly on fate, and see their sufferings as a will of God, as if God is the "creator of the `organized disorder.' "This distorted view of God leads the oppressed to give credence to the power of fate and fortune. More than being fatalistic, the oppressed are seen to be consciously or subconsciously internalizing the opinion, mostly negative opinions, of their oppressors on them. When they are told that they are sick, lazy and unproductive, the oppressed would in the end be convinced that they indeed are what their oppressors brand them - sick, lazy and unproductive. This very low self-esteem somehow hinders them from raising above their lot.

The oppressors, on the other hand, believe that the term "human beings" belongs only to themselves, and the others who are not like them are simply "things" at their disposal. They find it normal to dehumanize others, and to violate their rights. For them, the only rights that exist are their rights: "their right to live in peace, over against the right of the oppressed to survival." For them, money is the measurement of all things, and profit the primary goal. "For them, `to be' is `to have'." Thus, their goal is to accumulate all the money they could put their hands on. They put their fingers on every pie so they could have a share of everything.

Who process the childbearing of liberation?

The great humanistic and historical task of the oppressed is to liberate themselves and their oppressors. It is given that the "liberation" cannot come from the oppressors, in the same manner that "violence cannot be initiated by the oppressed but by those who oppress, who exploit, who fail to recognize others as persons."

Who are the "developers" of the pedagogy of the oppressed?

As empowerment is the result of a libertarian pedagogy, it is distinct from building skills and competencies. Education for empowerment further differs from schooling both in its emphasis on groups, rather than individuals, and in its focus on cultural transformation, rather than social adaptation.

Freire clearly shows that education can indeed be a catalyst for change. He truly understands that change cannot come from one person or from one sector. Change has to come from the majority who values freedom. And to liberate man from dehumanization is to educate him that he should not allow himself to be dehumanized.

What is the Banking Concept of Education as opposed to Problem-Posing Education?

Most of us, in one way or the other, have been educated the same way: the teacher talks and we, the students, listen; the teacher asks questions and we students answer; the teacher narrates the chronological order of Philippine presidents and we students memorize the order. Freire says that education has long suffered from this "narration sickness." And it's high time that we took some medicine.

In the banking method of education, passive learners receive deposits of pre-selected, ready-made knowledge. The learner's mind is seen as an empty vault into which the gold bars of approved knowledge are stored. This approach is also referred to as "digestive" and as "narrational" education. In the banking education, the teacher is the Subject of the learning process, while the students are objects or containers that are filled by deposits of information. The more full the container, the better the teacher. Those students who are easiest to fill are considered better students, and those who are difficult to fill are judged to be "problem" students.

The banking method of education therefore serves the oppressive society by 1) "mythologizing" reality (by giving false, superficial and inane interpretations of culture and reality); 2) resisting dialogue; 3) treating students as objects of assistance; and 4) inhibiting creativity.

These themes are what Freire calls as "generative themes" which are the "codifications" of the learners' experiences of political significance and are likely to generate considerable discussion and analysis. Obtaining these generative themes of discussion from the learners necessitate that the teacher represents situations familiar to the individuals. Peasants, according to Freire, become interested only when the codification (representation of the learner's day-to-day situations - a drawing, a photograph) relates directly to their needs. The teacher then asks questions that trigger various levels of interpretation and critical reflection of the learners.

Moreover, there have been failures in the "moralistic education" which sermonizes against certain vices of the peasants (alcoholism), and that which presents examples of virtue something which the peasants do not exactly consider as a manifestation of virtue (having one room for eating -dining room, and another for cooking - kitchen).

Problem-posing education is a libertarian pedagogy in the sense that it: 1) demythologizes (as opposed to the banking education's mythologizing) reality by posing problems about these facts of life; 2) regards dialogue as indispensable in the recognition of reality; 3) motivates students to become critical thinkers; 3) bases itself on creativity and stimulates true reflection of reality; and 4) takes people's experiences as a starting point.

Given that education is a political act, the teacher, being a facilitator, and the class, being a cultural circle, the two must be directly and connectedly engaged in the critical analysis of social reality. And it is not enough that both parties know what the reality is, they also have to understand and recognize the causes of this social reality - on why there is the reality of poverty and illiteracy among the oppressed and why there is a massive wealth among the oppressors.

It can be told that through Freire's work "Pedagogy of the Oppressed," our awareness has been stirred of the need to educate properly not only the privileged, but also the underprivileged of the role of culture in social change, not only in developing countries but also in developed ones. Today, in the context of global and social extremities, increasing levels of marginalization and new and larger range of poverty, these ideas of libertarian education must be re-thought, adapted, challenged and if need be, re-invented to face the new global neighborhood.

However, in a country where democracy reigns: a vote is a vote regardless who cast it. Scheming politicians and power-starved political dynasties keep the masses from knowing any better. For to educate a poor means to liberate him from being a fool. And only fools vote for these leeches. (Gawd! I hate being so negative!)
Posted by Yaw Lee