One of the President's men was caught panic-buying pirated DVD's in a Quezon City mall recently. This was the same man whose SUV bore high-powered assault rifles when searched after a vehicular accident. The man still clings to his post.

I will cut the man some slack. Let he who is without sin cast the first stone. No, I do not buy pirated DVD's. I either buy originals or borrow from friends (original or otherwise in whichever medium the film came in). But I download ebooks. Am I as guilty?

Buying pirated CD's and DVD's won't put you to jail or fine you a fortune, according to the Chief of Legal Division of Optical Media Board, Atty. Cocoy Padilla. Only those who make and sell pirated copies of copyrighted materials like software, video and audio discs can be punished under the Anti-Piracy Law.

Those who buy and own pirated DVD's, CD's, etc. are not covered by the penalties under RA 9239 or the Optical Media Act of 2003. People who buy pirated materials for personal use and not for commercial gains and activities have no liabilities under the Act.

Anti-Piracy Law is unlike the Comprehensive Dangerous Drugs Act of 2002 which mere possession of illegal substance shall warrant a penalty of life imprisonment to death and a fine ranging from five hundred thousand pesos (P500,000) to ten million pesos (P10,000,000). So said Google.

Be that as it may, if downloading ebooks in open websites is not punishable by the Optical Media Law, is downloading them a cyber crime? Sheesh! This world is getting cooohhmmmplicated.

Still I should sleep soundly at night until they revise RA 9239 and make clear what cyber crimes really are. But till then I shall keep my 230 PDF books safe in my iBooks. 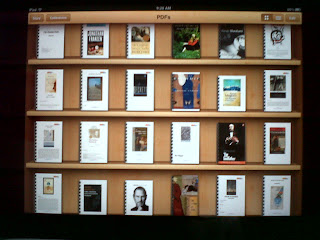 I thank my online sources: Project Gutenberg (www.gutenberg.org); 4shared.com; and this ebook gold mine which I cannot divulge right now lest it be besieged by people who read my blog (about ten of them :P ). Clue: It is a Chinese website with Chinese characters. Chinese? OK, so what's new there?

I thank some of the authors, too: