CNN's Eye on the Philippines

CNN's Anna Coren is asked:  "How do you make a show like “Eye On The Philippines” relevant to the West, which is only now starting to really take notice of Asian culture and growth?"

She says: "That’s definitely the case, and a lot that has to do with the improvements that are being made. You’ve got growth here; so much of the world is not experiencing growth. You’ve got four percent growth in the Philippines, you’ve got an economy that is improving after so long. From being the “Sick Man of Asia,” there’s real potential here. And that is why the world is sitting up and taking notice.

"You’ve got foreign investors coming in, the Ayala brothers told Andrew Stevens they’re investing $1.4 billion in the Makati area. The fact that money is pouring in is a positive sign, the fact that the government is cracking down on corruption is a positive sign. That’s what foreign investors want: stability and certainty. And that’s what this government is obviously trying to do. I mean, they need to do it if they want that investment."

And the CNN Press Release goes: "CNN’s ‘Eye On’ series is shining the international spotlight on the Philippines, with a special week of programming dedicated to the Southeast Asian country, airing to more than 280 million households around the world.

"From April 30 to May 4 ‘Eye On The Philippines’ features live daily reports from Manila, Batangas and Lake Taal and in-depth reportage on the people of the Philippines, the country’s politics, business and culture.

"The special week of coverage culminates with a half-hour program featuring highlights from the week, airing May 4 to May 6."

This is one aspect of the Johari Window on the Philippines I will be watching.

Giant China insists claim on Scarborough Shoal as it does on Spratly Islands. And based on most of the commentaries I read and hear, a lot of Filipinos are willing to go to war if China does not bug off.

How sweet! We cannot even win a war against one Henry Sy who insists on earth balling Baguio pine trees to put up his parking lots, we dare go to war against his whole country?

We are willing to go to war for measly shoals and coral reefs, but we close our eyes on people who fuck up the whole nation. Real sweet! Gawd! We cannot even eradicate Abu Sayyaf, the MILFs,  the NPA!

Every other Filipino wants to leave this country any way, why care about a few islands China has been drooling to conquer and own?

Enough of play acting bravery. Bonifacio will not resurrect.


In other news, "PH: World's best country in business English," and "Filipinos among 'least rude' in the world, says survey."

The Vow of a Sexless Life 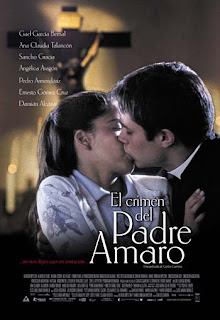 I was a couch potato most of the long Holy Weekend: playing Fruit Ninja, getting exasperated by Temple Run, chilling out with Bubble Explode, jogging in place to The Voice super marathon, watching endlessly movies playing both on cable and free channels. Nora Aunor's "Naglalayag" was fairly interesting. I didn't know Yul Servo could really act.
And there it was, a foreign film (Mexican I guessed and my guess was right when I checked the movie details later.), dubbed in Filipino over Cinema One. I was channel surfing when the remote hovered over it. You have to hand it to Cinema One. When they dub non-English foreign films to Filipino, the films are most likely notable. So I checked what was going on. I didn't catch the opening credits of the film, but the scenes were so good, one would be easily drawn into it. It is one of those films that can start in medias res.
The movie The Crime of Father Amaro was first released in Mexico in 2002. It caused a lot of controversies and mayhem on the part of the Catholic groups who tried to stop the film from screening. But this chaos only helped the film be one of Mexico's top grossers of all time. When it was released in the United States, it received the same protests from American Catholics. And like a moth to a lamp, moviegoers gave it its renewed commercial success. I wonder if it was also shown here in Ph.
And here's Cinema One showing the controversial movie for free, late afternoon of Good Friday, the Catholic Church's most sacred day. Good job!
The movie is about a young priest who fell in love with a 16-year old teacher of Catechism whom he got pregnant and who died after he sent her to an abortionist. The film offered he could have left the Church and gone to a place where no one knew him and the girl, where they could start a new life together as husband and wife. But Father Amaro wouldn't leave priesthood because it is his life, and that it gives him immeasurable joy to help people with his teachings of the Word of God. The movie showed no sarcasm in this. It was the young priest's twisted belief in what is right. He taught that what feels good must also be right.
The movie also tackles the church's cuddling of a drug lord who financially supports the hospital project of the church. This reminds me of our own bishops who received SUVs as "gifts" from the former administration of Gloria Macapagal Arroyo. Never mind that it was illegal, mind only that these vehicles helped them help the poorest of the poor. Some of the bishops said, or something like that.
The film also depicts the path that the late Father Balweg took. It shows a priest who joins the insurgents and defies orders from the Catholic hierarchy to come back to the fold , and who later on is slapped with ex-communication.
Then there is Father Benito, an elderly priest who has taken a widow to bed as his mistress. He defends that she needed him after her husband died. In the beginning, it was just an act of kindness, but love came in and sex came, too. The widow's daughter is the 16-year old who fell in love with the young Father Amaro. At the third quarter of the film, Father Benito finds out about Father Amaro's affair with the 16-year old religion teacher. The elder priest's driver informs him about Father Amaro's little excursions to his house, and the young priest using one of his rooms to teach the girl the basics of the nunneries. Of course, this is just a scheme for the young priest to have the girl all to himself.
One of the strongest scenes in the movie that impressed me is when the bishop is shown giving orders to Father Amaro to lead the parish after Father Benito sustained an injury which the former caused (See the movie to know how it happened.), and the rebel priest got booted out of the fold. While Father Amaro is talking at the other end of the line, the bishop is on his cellphone, naked and is seen getting ready to take a bath in the tub. This metaphorical scene tells how human the bishop is like everyone else doing humanly chores. It is a big departure from a lot of films that show religious men impeccably clad in robes and other paraphernalia of their ranks when they perform official duties in their office, surrounded by assistants. It shouts to me "Don't attach divine attributes to God reps , they are as fallible as you and I."

So should priests be forced to carry to the ends of the earth the vow of celibacy? Never mind marriage. It is not even discussed in the film. The movie doesn't show the struggles of both Father Benito and Father Amaro to want to marry their women. They don't say they are willing to commit sin to marry them. They are only ready to commit sin to satisfy carnal desires, the call of the flesh, the way of the flesh.

Just because they can't marry the women, they will just have sex with them. This is too crass. It isn't about marriage at all. It is about the vow of a sexless life.
Posted by Yaw Lee No comments:

St. Therese College of Cebu has been too hasty in imposing punishment on five of their female students who posted on Facebook pictures showing themselves in their bikinis, with liquor and cigarettes on the side. The school sure knows how to punish where it hurts the most: a ban for all five from attending the school graduation rites.

I would love to see the STC's school handbook where it prohibits its students from "posing and uploading pictures on the Internet that entail bodily exposure."

STC claims the "girls were still allowed to graduate. They were not expelled. The only penalty imposed was the prohibition from joining the graduation ceremonies."

Does the school handbook have "prohibition from joining graduation ceremonies" as part of its sanction list? Is this the girls's first time to commit this offense? Second time? Third time? What I remember about school policies is that offenses are sort into categories of being minor, quasi-major, and major offenses. And each category has levels of sanctions. For minor offense, a first time offender may be given a verbal warning; second offense written warning. For major offenses, the highest sanction can be expulsion. So I ask, is "posing and uploading pictures on the Internet..." a major offense, that STC is so proud to announce that the students were not considered for expulsion. This as if the school has delivered their most merciful act.

And how can you expel students when they have most certainly completed their academic requirements to be considered for graduation? They cannot expel them either. The school is almost over.

STC punished them where it most hurt. What could be worse than being banned from attending your High School graduation? Never mind college. But high school?

The students might have offended the school and its ideals, but is it too hard to embrace those who did wrong and while you say you love them, lead them to the right path?
Posted by Yaw Lee No comments:

First off, I'd like to thank McDonald's Fastbytes for the free WIFI.

Back at the office the connection has been stone-age-ish since the weekend. And while I download those emails, here I come with some thoughts.

McDonalds has been playing some cheesy songs from Martin Nievera (Just Say You Love), Michael Bolton (I Said I Loved You But I Lied), Depeche Mode (Somebody) etc. this morning.

The sun is up from where I sit. Real summer sun. Trees sway ever so lightly.

David Archuleta released an OPM album last week. Forevermore. I think the track "Maybe" by NeoColors was the best from the other four I heard. (Shut up!)

Mike Enriquez has been very careful pimping CJ Corona. Or is it because, we have not been tuning in to DZBB lately?

Finished reading "The Catcher In The Rye." Will take note to write about it when the mood catches me.
Posted by Yaw Lee 1 comment: