(I'm being oh so shameless here. I love, love this new song so much! )

I get lost under these lights
I get lost in the words I say
Start believing my own lies
Like everything will be okay
Oh I still dream of a simple life
Boy meets girl makes her his wife
But love don't exist when you live like this
That much I know, yes I know

What do I say? Pnoy's administration is full of activities and drama. And here's the President mocked for "Noynoying"!

A year ago in November, we saw how GMA was trumped from leaving the country despite Supreme Court's order allowing her to seek medical treatment abroad. DOJ Secretary Leila De Lima just wouldn't be taken for a fool, disbarment or not.

A few days before Christmas last year, Renato Corona, the 23rd Chief Justice of the Supreme Court of the Philippines, was impeached.

And more debates delivered grandstanding senators on the Reproductive Health Bill. We saw one cry. The same was caught plagiarizing twice.

Then just recently, the passing of the Anti-Cybercrime Law. All twitter-verse broke loose, blog-dom came down, FB and the vast Internet raised arms! Bill author and supporters turned the coat and pleaded amendments. Shortly, Supreme Court issued TRO for 120 days.

Then about a week ago, Senator Ralph Recto got the boot for watering down the Sin Tax bill that would have delivered 60B in revenues aimed to support health services for those afflicted by smoking and drinking related diseases. Senator Franklin Drilon took over.

This year, global creditors, financial and business analysts and institutions gave the Philippines thumbs-ups, taps on the back, positive ratings, and rave reviews. Of course, our dear OFWs are always quick to take the credit. Oooppss! Hey! Anti-Cybercrime Law TRO is in effect!

Then there's E.O. 79 institutionalizing and implementing reforms in mining in the Philippines.

A couple of months ago, the 24th Chief Justice of the Philippines was named. A female who has been widely criticized for her audacity to display her faith during official functions.

Gloria Arroyo on hospital arrest. This lady gets sick on special occasions: Pnoy's SONA, Corona impeachment trial, arraignments, etc. But when lull time, you get to see her enjoying the spa in Tagaytay! This is one sick joke. PDI editorial hits the bulls eye today, "But if Arroyo is truly ill, why is she running for Congress the second time?"

On its second reading, K to 12 has just been approved by Congress as of this writing.

And of course, there's China Crisis. Political Dynasties reload. Local Elections. Grace Padaca in COMELEC. Bam Aquino, Pnoy's nephew and Noynoy Aquino look-alike is running for senator. THERE IS NO WAY IN THE WORLD I AM GOING TO VOTE FOR THIS ONE. Manny Pangilinan throwing tantrums... 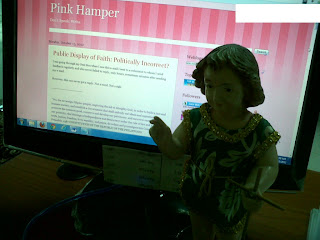 I was going through my Sent Box when I saw this e-mail I sent to a columnist to whom I send feedback regularly and who never failed to reply, only hours, sometimes minutes after sending my e-mail.
However, this one never got a reply. Not a word. Not a sigh.
___________________
"We, the sovereign Filipino people, imploring the aid of Almighty God, in order to build a just and humane society, and establish a Government that shall embody our ideals and aspirations, promote the common good, conserve and develop our patrimony, and secure to ourselves and our posterity, the blessings of independence and democracy under the rule of law and a regime of truth, justice, freedom, love, equality, and peace, do ordain and promulgate this Constitution." Preamble, 1987 CONSTITUTION OF THE REPUBLIC OF THE PHILIPPINES.

Yours and Mr. __________ columns today criticize the new Chief Justice Sereno's "repeated reference to God's will to explain her appointment." That it is tactless, "supremely arrogant, if not delusional."

Why? Are we turning into Americans who prohibit prayers in classrooms, who mock an outstanding football player for praying before and after every game, win or lose?

Why is one's manifestation of faith inappropriate now? Why cringe when we hear someone refer to God during an official event? I won't start quoting Biblical verses here, but shouldn't we acknowledge the Almighty One in every thing we do, give thanks for every little thing we receive? Or should we only do that when no one else pays attention?

Above, I copied the Preamble from the 1987 Constitution. Why don't we all cringe reading that? Should we go for Charter Change, let's strike out "imploring the aid of Almighty God," then we will all be politically correct.

Bruno Mars launched his newest single "Locked Out Of Heaven" from his second album called Unorthodox Jukebox earlier today over Youtube via videochat, champagne, and #AskTheDragon.


This song is a good soundtrack on the implementation of the Anti-Cybercrime Law.