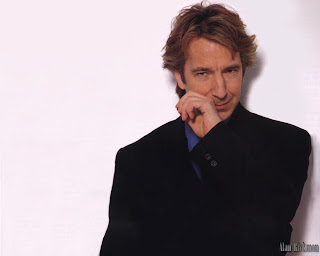 A friend gave me a copy of the complete Harry Potter audiobooks which I listened to over the holidays and finished about a week ago.

My friend was right in saying I might have missed some points in my reading of the books and/or watching the films and listening to the audiobooks might just help me bridge the gap. How right he was!

But more notable than that is my subconscious adaptation of the British sound what with Stephen Fry stuck on my ears for weeks!

And another miracle happened. I fell in love with the character Snape who turned out to be The Other Hero in the series.

I started watching the HP movies if only to rediscover Snape. But instead of rediscovering Snape I discovered Alan Rickman.

I started with Sense and Sensibility which also featured the pre-Titanic Kate Winslet and Emma Thompson. The movie is so good I had to read Jane Austen herself. It was weird hearing Snape reading romantic verses to Marianne (Winslet) but he was so good! So darn good! And that scene when Emma Thompson realizes that the character played by Hugh Grant is not married after all was remarkably and emotionally explosive it broke my heart and sent torrent of embarrassing tears to my eyes.

Next I watched The Search for John Gissing where Rickman played John Gissing, then Truly Madly Deeply, and followed by Blow Dry. What a gem of films those are. And Rickman! He dominates almost every scene he appeared in. Fantastic!

Given enough time, I will definitely write reviews of these Rickman films. I swear most of them deserve to be written about.