The Balding Prince and The Fantasy World 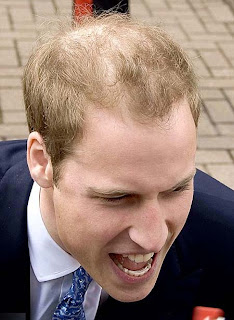 OK. So he is human after all.

I wouldn't have noticed the hair had he not gone out announcing to the world he is getting married. The wedding that is bound to be the grandest of royal weddings in 30 years.

OK. I will cut him some slack. He is an RAF rescue pilot. He took up art history in college, and later on geography, too.

Art History. Wow! You were born without a bone of an artist so you decided to study art history. You probably want to have more than one night in a museum, and not just to be a guard in a museum. You probably want to dig deeper into the heart of Greece, travel in time, be blown away by humanity's genius. And you are one of the princes of Wales, the second heir to the thrown, next to your father. How could one be so lucky whose only problems are the paparazzi and his fast receding hairline?

Another slack here. You are marrying a commoner, a daughter whose parents' business is to organize children's parties. Like you, she's 28. You are not marrying a girl half your age as most famous, wealthy, powerful men are in the habit of doing.

The world is changing. Male marries male. Female marries another female. Rich people when they die leave wealth to their dogs. The best golfer in the world is black. The best boxer on the planet is Asian.

Indeed a great fantasy era to exist in!
Posted by Yaw Lee